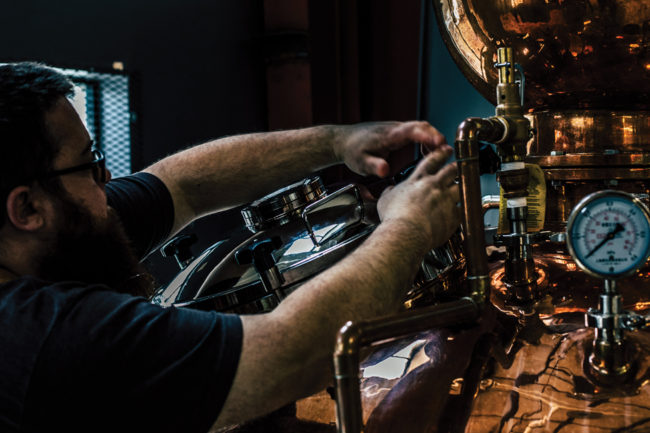 In the early 1920’s right after World War I, times were tough in Truckee. Sawmills closed, the ice industry all but shut down and National Prohibition Act was still in effect. Locals quickly found that “moon shining” was one of the only means of survival in the cold and desolate mountains. Historians document there were speakeasies on every block downtown and illegal slot machines in basements on Jibboom Street. In fact, many argue that Truckee was the biggest bootlegging area on the west coast, which is not too far fetched when you take into account underground distilleries exploding and causing massive fires several times between 1921 – 1929.

It’s been almost 100 years since the 21st Amendment repealed prohibition and since Truckee had a local distillery in town. But Old Trestle Distillery is hoping to bring a little bit of Truckee’s history back to life. Currently, the distillery is actively producing gin, vodka and laying down whiskey in a local production facility. All available spirits can be found for purchase at Zanders and served at Cottonwood, Old Town Tap and other local establishments. And come the summer of 2020 the plan is to open up a smaller distillery, riverfront restaurant and tasting room on West River Street.

And behind the main product operations is Master Distiller, Jake Holshue. Jake sits on the board of directors for the American Craft and Spirits Association and made his way to Truckee via Montana, Maryland, and Oregon overseeing several other distilleries along the way. Jake not only oversees the distilling process and recipes, but also puts focus on education and experimentation. Working with a forager to collect local botanicals, using only alpine water and possessing a pioneering spirit, his main goal is to create world class spirits, made in Truckee.

For a real taste of Tahoe, Old Trestle spirits just might be the answer; made in Truckee, from the soil and minerals, and derived from the over 100 year old legacy.

Read the rest of the latest issue of Mountainside Magazine here.