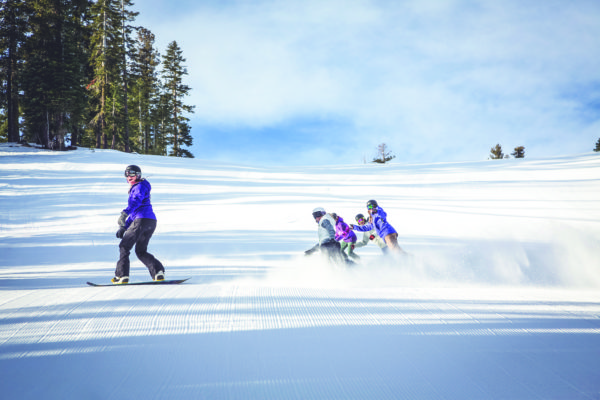 If you ask, Luke Sheppard will probably tell you he’s living the dream.

A career snowboard instructor, the job led him to opportunities around the world early in his career—in destinations like Verbier, Switzerland, Cardrona, New Zealand and Niseko, Japan. Since 2005, “Shep” as he’s known by many of the Northstar team, has been part of the Northstar Ski & Snowboard School, and has had oversight of the Burton Academy since its inception.

In 2008, the concept for the Burton Academy was to use man-made, shaped terrain to reimagine the way instructors have always taught people to snowboard. Shep will tell you he and his team have always been motivated to grow snowboarding participation. Ten years later, the Burton Academy’s terrain-based learning style has not only proven successful, it has been incorporated into all of Northstar’s beginner lesson programs—for both snowboarding and skiing.

“We’re continually trying to reinvest and reinvent so we can improve the learning experience and get more people to embrace snowboarding.”

Today, the Burton Academy—still the only one of its kind—is considered to be more like a “university” for snowboarding instruction. Only certified, experienced instructors whose goal is to make people fall in love with snowboarding are part of the Burton Academy coaching team. And, instructors not only help students find the right fit for their snowboard equipment, they consider it their job to fully immerse them into the culture of snowboarding. This personalized approach has made the Academy a test ground for new ideas and programs Northstar offers; something Shep takes great pride in.

His response when you ask what’s ahead for the Burton Academy in the next 10 years? “I think it’s going to surprise me. We’re continually trying to reinvest and reinvent so we can improve the learning experience and get more people to embrace snowboarding.”

So, what does he do when he’s not snowboarding? In the summer you’ll find him applying what he’s learned to the Specialized Bike Academy at Northstar, riding his mountain bike or motorcycle, and doing just about anything his kids want to learn to do. “Watching my kids learn new sports gets me really excited about teaching and learning.”

After all, that’s what it’s all about, right?

Read the rest of the latest issue of Mountainside Magazine here